You are here: Home / Travel / Eureka! Get Wrist-Deep In Alaska’s Mining History At The Famous Gold Dredge 8

Few experiences are more authentically Alaskan than panning for gold. And few places immerse you in that experience better than the historic Gold Dredge 8.

There are a lot of ways to have a true Alaskan experience:

While those are great ways to explore the state’s natural bounty, the Alaskan experience is something different. It’s a way of living. It’s about resilience and self-reliance. About taking chances despite long odds.

Gold prospecting exemplifies that lifestyle. If you’ve ever seen Clint Eastwood’s Pale Rider, it’s very much like that, but in a much harsher and more remote environment.

Recently we spent the morning at one of the most famous gold mining sites in American history where 7.5 million ounces of gold were produced. It’s a surprisingly small operation, but its impact on the area’s development can’t be understated.

In fact, the city of Fairbanks wouldn’t exist without it.

Fairbanks is the largest “city” in Interior Alaska

About 32,000 people call Fairbanks home, giving it a virtual tie with Juneau as the second-largest “city” in Alaska. Anchorage is home to nearly 300,000.

But unlike Juneau or Anchorage, Fairbanks is deep in Interior Alaska.

There aren’t many populated towns away from the Alaskan coast, but Fairbanks is the exception.

“There’s gold in them there hills.”

We sometimes forget that these commonplace phrases once didn’t exist.

These words were first uttered by Felix Pedro, an Italian immigrant and gold prospector who struck gold on July 22, 1902 in an unnamed creek near the current site of Fairbanks, Alaska.

Today that creek is rightly known as Pedro Creek, though that’s only because he named it after himself.

It’s partly luck that Pedro found gold in Fairbanks. Pedro owes that luck to a trader named E. T. Barnette, who accidentally ran his ship aground in modern-day Fairbanks. Barnette, with his family in tow, set up camp and built a small trading post. Shortly thereafter, Pedro wandered in, bought some supplies, headed to a nearby creek, and found gold.

When Barnette heard of Pedro’s find, he spread the word far and wide to build excitement and drum up business for his newly established trading post. The 1902 Fairbanks Gold Rush was in full swing.

Over the next 18 years, Fairbanks’ population grew to over 1,100 people, but gold mining was still done on a small scale and mostly by hand.

Between 1920-1930, gold mining scaled up big time as the Fairbanks Exploration Company bought a 30 by 50 mile claim and brought in gold dredges to mechanize the process.

By 1930, Fairbanks had nearly doubled in size as the Fairbanks Exploration Company needed workers to set up their equipment. That meant digging the 90-mile Davidson Ditch, assembling and moving equipment, and even building a power grid from scratch.

All told, the company invested $15 million (in 1920s dollars) in their Fairbanks gold mining operation in hopes of making multiples over the next few decades.

Gold dredges did the bulk of the work

What is a gold dredge? Glad you asked. I didn’t actually know until one was right in front of my face!

A gold dredge is a boat that processes literal tons of paydirt without manual labor.

Paydirt is an actual thing. In this case, dirt that has sufficient amounts of gold ore to make it profitable to recover.

There are four basic functions of a gold dredge:

I took all of that from this educational poster aboard Gold Dredge 8.

Gold Dredge 8 is one of these dredges

Gold Dredge 8 operated from 1928-1959 and only moved 4.5 miles during that entire time, yet it produced 7.5 million ounces of gold. According to our tour guide, that gold was worth over $150 million. That’s over $10 trillion in today’s dollars.

Did You Know? World War II interrupted gold mining in the US as Order L-208 forced the closure of all US gold mines. By the time the war was over, workers had found new careers with salaries too high for the gold mining companies to match. Very few gold dredges re-opened after the war, but Gold Dredge 8 was one of them.

Today you can tour one of these famous gold dredges

Gold Dredge 8 was officially placed on the National Register of Historic Places in 1986 and has been a popular tourist activity for over three decades.

Intrigued by both Alaska’s gold mining history and the chance to find gold ourselves, we bought tickets for the two-hour tour.

We did the 10:30 am tour and were actually the first people to arrive. this gave us some time to check out another marvel of Alaskan engineering–the Trans-Alaska Pipeline!

Timeout–let’s talk about this pipeline

The Trans-Alaska Pipeline, also known as the Alyeska Pipeline, stretches 789 miles from Prudhoe Bay to the port city of Valdez in Prince William Sound.

Prudhoe Bay has a massive oilfield that produces about 42 million gallons of oil per day. The problem is that Prudhoe Bay ices over during the winter, making it impossible to ship the oil from the bay by ship.

The oil companies needed a way to get the oil to a port that didn’t freeze over, so they built one.

All told, this pipeline carries about 20% of the entire US’s oil consumption.

Back to Gold Dredge 8

Where was I? OK, yes–we took the 10:30 am tour and were the first people there. But we were far from the last. Take a look at that crowd!

Our guide has been working with the Gold Dredge 8 tour company for over 20 years and actually is a professor at the University of Alaska right down the street. He knows just about everything about both Alaska’s gold mining history and the Trans-Alaska Pipeline.

He wasn’t the only character on our tour. Once the introductions above are done, you board a diesel train that pulls you through the woods where the tour company has set up a few demonstrations of how gold mining worked on both the small and large scales.

On that train you’ll meet this man. He fills in the silence while the train is moving by playing some of his favorite country songs. He claims he opened up for Johnny Cash. I have no reason not to believe him.

At long last–not really, it was like 15 minutes–we arrive at Gold Dredge 8!

The train pulls around the backside of the dredge where you’ll see this little town-looking thing.

To the right is this wooden structure with a lot of long tables filled with water. This is where you pan for gold!

Gold panning doesn’t require much equipment–a pan, some water, and some paydirt.

What’s really cool is you get to keep whatever gold you find!

When you’re done, you take your gold flakes inside where attendants weigh it out and tell you how much it’s worth. I found $12 worth of gold. As usual, Dawn beat me. She found $21.

When you’re done panning for gold, you can walk around the grounds on your own self-guided tour. We made a beeline for the dredge.

It’s crazy to think this thing produced 7.5 million ounces of gold. You need to process a lot of paydirt for that kind of return.

This conveyor belt of buckets scraped the floor and shoreline of the flooded land, emptying 22 buckets of dirt into the sorting trommel every minute.

Once the dirt has been dug, it’s time to sort.

The image below shows the 36-foot long trommel, which is basically just a rotating screen tube.

The trommel is perforated with progressively larger holes as dirt tumbles down the tube. This allows the smaller pieces to fall out first. Any rocks that are too large to fall through the screen make it all the way down the trommel where a conveyor belt spits them out the back of the dredge. These large pieces are called trailings.

The image below shows the gold capturing system. As dirt is sorted by size, it falls onto these slotted trays.

This is where a cool chemical trick comes in handy.

The traps inside the tables were lined with quicksilver, or liquid mercury. As dirt mixed with tiny amounts of gold pass over the mercury, the gold combines with the mercury to form an amalgam, thus pulling it out of the dirt.

Every two weeks, workers shut down the dredge to harvest the mercury-gold amalgam. When heated, the mercury evaporates away, leaving the gold behind. The mercury is captured and reused.

Did You Know? After gold was recovered, it was molded into the typical gold bricks you’ve seen in movies. Workers then wrapped the gold bricks in paper, threw a stamp on them, and mailed them via standard mail to the Federal Reserve in San Francisco. They were sent via regular mail! They never lost a brick.

A little over an hour after arriving at the dredge to pan for gold, it’s time to board the train back to the starting point.

We loved our trip to Gold Dredge 8. Fairbanks isn’t as glamorous as the coastal regions of the Kenai Peninsula, but the city has a rich history and its people are proud of it.

The 1902 Fairbanks Gold Rush has come and gone and the dredges are no longer operational, but gold mining is alive and well in Fairbanks. Fort Knox Gold Mine, just 26 miles north of Fairbanks, is the largest producer of gold in the state today and is expected to continue mining into the 2020s.

Our guide also told us about a new mine being planned in the area that will keep the tradition alive for a few more decades.

In his words, Fairbanks has a “golden past, golden present, and golden future.” Though we didn’t get the chance to be a part of the city’s excitement in 1902, we did enjoy reliving it during our tour of the historic Gold Dredge 8. 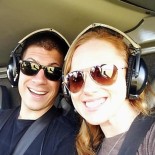